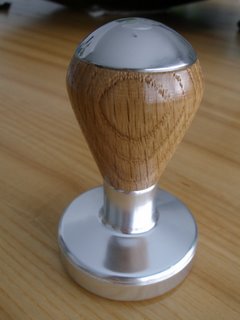 This it is tamper. Tyyne tells what it is. Tamper will be used the making of the espresso in it at the stage when the espresso powder is condensed as a tight cake to the handle part of the cooking apparatus.
Such also for the crisis circumstances one must get there to every economy next to the iodine tablets. Does somebody laugh ? One not long when Tyyne tells what took place in 1982 in Congo. It was a typical warm afternoon. The chief of police of the village wiped a couple of leeches from his shoulders with a relaxed light touch and laughed satisfied. There was still the big lot of espresso beans to the village within an hour namely coming. The chief already almost felt quite that thick drink flowed quietly caressing taste nerves there all the way to the stomach. From the road already the noise of the heavy driving council (many vehicles in the line) was heard. The noise hardened its hardening. The chief made this a quick estimate: either the procession approaches the village or those witty drivers, however, fool and drive to be their amusement on the number one on hard gas. In any case the beans arrived there and then unground well, before the evening. The hill (however, the active one not) which is nearly high a volcano consisted of the flour. The people rushed to the espresso cooking apparatuses with its flour. But what on earth; nobody had remembered to get tamper ! It was looked for in every place even the iodine tablets of the medicine cabinet from there both sides and from the front and from behind. The panic took over the people even though the chief of police tried to calm the people. The people ran skittish to and fro in the head the wheels, the eyes. The whole village collapsed and the hill also that was just ground was trodden to the dust of the country. The story will get so horrible shades at this stage that it is the best because of the child readers but to state: get tamper.